Board of the ITS Austria
© Zinner / AustriaTech

Home » About ITS Austria » Board

Board of the ITS Austria 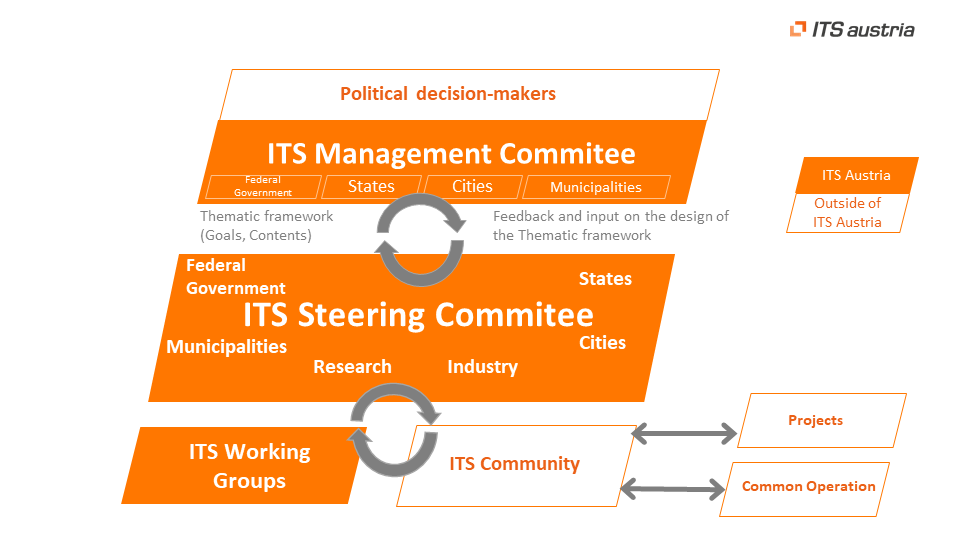 The ITS Management Committee is composed of representatives of the federal states, cities, municipalities and the Federal Ministry of Transport, Innovation and Technology (BMK) and contributes their positions on ITS to ITS Austria. The ITS Steering Committee is the formative body of ITS Austria, which is composed of representatives of the operators, the public sector and research institutions.

The ITS Management Committee advises on proposals from the ITS Steering Committee on the thematic framework, ITS goals and work programmes. A clear focus is on the implementation of the ITS goals and strategies as well as their operationalisation. The ITS Management Committee serves to balance the interests of the actors in public administration. Regional, national and international developments are taken into account in order to develop impact-oriented objectives for the digital transformation in mobility for Austria and to accompany their implementation.

The ITS community is located outside the ITS Austria structures but is jointly responsible for the implementation of projects and pilots, also in the field of research. The members of the ITS Community act as multipliers by disseminating information and contents of ITS Austria in their organisations, clusters and personal representations and by supporting their processing and implementation in accordance with the various areas of expertise.

The ITS community is composed of mobility actors and cross-sectoral organisations (e.g. IT service providers, energy suppliers, automotive). AustriaTech supports the organisation and operation of ITS Austria and forms the secretariat of ITS Austria. The management of AustriaTech assumes the role of Secretary General.